You can find books of widely disparate plot, topic, and theme categorized as science fiction.  I think this is a reflection of the world as it changes around us.  Sci-fi is not a static construct. It’s dynamic.  It evolves as we progress along the road of discovery.  As such, there are a variety of definitions that attempt to describe the boundaries of a genre that doesn’t want to be contained.

These are my thoughts on the subject:

by Joseph Conrad, 1902 (it was actually a 3 part story written for a magazine prior to its publication.)

This is a book that you won’t get out of your head.  The protagonist, Charles Marlow is telling a story to his shipmates about his adventures in Africa as a river boat captain.  It is a multilayered tale of darkness that does a great job in capturing the sheer ferocity of the sickness/evil that lurks in the human mind.  It’s written in an interesting style and years later I can still remember images such as…his mouth and teeth were open as though trying to swallow the entirety of mankind; in reference to the natives appearing along the edge of a clearing in the jungle – the world exhaled and they were there, inhaled and consumed them.  The lines…”The horror. The horror.” are especially poignant.

Heart of Darkness certainly captured elements of what I hoped to instill in the experiences of the main protagonists, Jake Gillean and Benjamin Murray, in The Chronicles of Gillean.  In their own ways, they are fighting to maintain hope that mankind is more than what the darkness of their experiences would lead them to believe.

Emotional Intelligence:  Why it can matter more than IQ

I would rate this book as an absolute must read.  It’s a great introduction to the brain and you will be able to pick up pearls regarding how the mind works.  Included is a model for understanding depression, anxiety disorder, anger, as well as those positive traits we demand of our leaders.  You won’t look at the world or your relationships the same after you read this book.  Before and since its publication there has been an explosion of research in the world of neurosciences and psychology exploring how and why we process emotions and how we learn and store information.

In a nutshell, the human brain is not only an organic computer, it’s also the most advanced computer we have ever encountered.  We are blessed to be living in exciting times as we, as a species, are beginning to unlock its secrets.  As we learn more and grow our appreciation of the sheer enormity of the demands we place on the brain for survival, it appears that the likelihood of developing an artificial intelligence that approaches the processing speed and nuance of our brain is, at least at this point in the 21st Century, utterly preposterous.

Concepts of emotion processing and brain function appear in subtle fashion throughout The Chronicles of Gillean – follow along as Dr. Benjamin Murray conducts his vicious neuro-interrogations and as Lt. Col. Jake Gillean wrestles with his inner demons.

What can I say that millions of others haven’t already said or thought.  This is an amazing series…the consummate story of good versus evil.  I can’t image a literary life without having read J.R.R. Tolkien’s books, starting with The Hobbit and going to the end of The Lord of the Rings trilogy.  As wonderful as the movies were/are, I think reading the books was a much deeper experience and should be a part of every person’s library.

Looking back on it, I think that one of the things that stuck with me was the plight of Frodo.  When I first read it I don’t think that I quite understood what Tolkien was trying to say about the nature of evil as embodied in the ring.  Sure, it was obvious that it was evil and that it magnified extreme passions.  What I am referring to are the more subtle aspects of what it did to Frodo – how his continued possession of the ring increasingly weighed him down, how in the end it won out even over him, and how afterward his mind was irreparably harmed by the experience.  Tolkein was masterful in the way his story drew parallels with our life journey and our frailties as an imperfect species.

There are some direct connections with this philosophical/spiritual concept and what is being discovered on a scientific level.  What I am referring to is the potentiation of neural pathways in the human brain.  Thought processes and deep emotions are directly related to patterns of neural firing in the brian/cerebral cortex.  A specific thought process, if repeated over and over again, causes the strengthening, or potentiation, of the corresponding specific pattern of neurons.  Over time, the strengthening of these pathways has the potential to indelibly change who you are.  Focus on the negative and that in many respects is what you become.  These ideas are not new in the study of the neurogenesis of psychoaffective disorders such as depression and anxiety disorders.  In a way, in Frodo’s journey is a lesson for all of us – focus on evil, stay in close proximity to it, choose to keep it as company, and it will change who we are, and the damage could potentially be irreparable.  The same principle of course goes for the forces of good.

There are definite story lines within The Chronicles of Gillean that embody this concept, most poignantly with the main protagonists Jake Gillean and Ben Murray.

Certainly can’t think of childhood and the wild influences books have had on my imagination without thinking of Ivanhoe.  This story boasts a cast of characters that are memorable and continue to spark imaginations almost 200 years after pen was first put to paper.  The cast includes the disowned son – Wilfred, his angry father Cedric, the band of outlaws following Robin of Locksely, King Richard the Lionhearted returning to claim his throne, the beautiful Rowena and Rebecca, and a cast of villains including Prince John, Brian de Bois-Guilbert, Reginald Front-de-Boeuf, and Maurice de Bracy.

In the story, set in Twelfth Century England, we see people driven by passions and emotions.  Through their trials we can certainly gain an insight into what Sir Walter Scott may have witnessed in the struggles of his day.  Through his work it is easy to imagine what he might have said if asked at a dinner party his opinion about the nature of man.  He said as much in his work. He portrayed ambitious and ruthless men wrapping themselves in cloaks of clerical righteousness. Those with power and means, the nobility, disenfranchised others of less socially fortunate birth.  Even those of lower birth embraced the extreme hatreds and prejudice of the day…in this case anti-semitism.  At the same time, there is an opposing force, a force for good fighting valiantly against the negatives humanity has to offer.  At its heart – it’s a wonderful old-fashioned tale of good versus evil.  You have to read it for yourself to see how it ends.

The Chronicles of Gillean is a story with plot lines that are overlapping and interwoven in such a way that when characters and forces collide they do so with absolute fury.  The ultimate goal is to provide entertainment. If you can slip into another world for a few hours, if you can climb inside the heads of characters from both the future and the past and find their journey compelling, if you see elements of yourself and the present state of the world buried in the story, if you experience the raw emotions along with the characters, and if you find yourself wanting to know what’s going to happen…then I have accomplished my goal.

On another level, buried between the lines is an exploration of many questions. Chronicles pushes but doesn’t answer…you have to come to your own conclusions.

In the end, The Chronicles of Gillean is about the life of Jake Gillean.  Follow him on his journey for redemption…he is a husband and father, a warrior and soldier, a man who earned everything, and then lost everything – including his soul.

One thing became painfully clear when I first began writing Chronicles…my training/background up to that point in my life (medicine and science) had left me woefully unprepared for this type of project. Even my love of all thing history and rather healthy reading list was inadequate as most of it was written in narrative form.  Compelling first person history is a rather recent development, or at least it has become more popular in recent times.  The right side of my brain knew exactly what it wanted to say – the flow and the art form was there, but the left side struggled to let go of anything that wasn’t scientific and brutally narrative in form.  Recognizing this I sought help.  I read as much as I possibly could, I was reading stories certainly, but also studying the style and creative genius of the authors.  I ran my own little clinic.

Despite all the personal efforts, books and reading can’t replace the human interaction of an editor  (mine is a genius by the name of Diane Mettler). That’s where real training takes place.  IT WAS BRUTAL!!!  I brooded over her comments and criticisms, drowning my emotions with coffee strong enough to pop eyeballs.  “Why can’t she see where I’m going with this?” or  “This is a vital part of the story because of something that will happen three chapters later.” or  “There’s no other way to do this because the reader needs the background information so everything will make sense.”  Each and every time – I WAS WRONG.

Some of the basic lessons I learned are as follows: 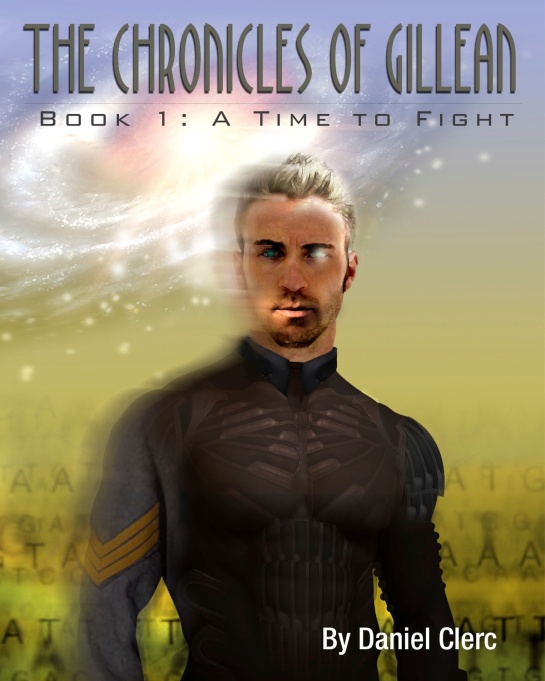 This is the book cover designed by Chris Bivins.  It pulls several of the central themes from the story.  In the upper left and the shadow/phase shift added to the image represent the fourth dimension – time travel.  The scrolling letters across the back represent the four subunits to DNA.  The glow of the left eye represents the imbedded/implanted quantum computer that allows the elite special ops soldiers to integrate advanced weapons systems with the function of their military exo-suits.  His torso and left arm represent the exo-suit of the 24th Century.  His right arm represents the uniform of the Confederate cavalry during the Civil War (1861-1865).

Must read or see

The Chronicles of Gillean

The Chronicles of Gillean